Taipei, Taiwan (April 2nd, 2018) MSI, the world’s No.1 gaming brand, revealed the latest generation of its flagship lineup GT series. With the introduction of the latest 8th Gen Intel processors, the GT series takes one step further by featuring the world’s 1st Core i9 overclocked processors. Together with the NVIDIA SLI graphics and mechanical keyboards, the new GT series pushes performance beyond the limit and offers uncompromising desktop gaming experience for the pro gamers. The GT75 Titan is the first gaming laptop to ever feature Intel Core i9 processors with fully unlocked hexa-core performance. With the MSI exclusive Cooler Boost Titan cooling design, the fully unlocked 6-core 12-thread configuration releases its full potential with extreme overclock performance. The combination has contributed a 70% performance leap over the previous Core i7. The extra cores are especially beneficial for gamers who stream their gameplay, or for advanced multitasking workload. Together with a pair of GeForce GTX 1070 graphics in SLI, the GT75 once again exceeds the laptop performance boundaries.

The Rapid Mechanical RGB keyboard has been the core of the flagship since its first launch. The innovation offers optimum tactile feedback and is built for fast and responsive action. In addition to the 10Gbps Killer Ethernet, the GT75 also features an upgraded wireless connection to the latest Killer Wireless-AC 1550. With up to double the speed of the standard 802.11ac Wi-Fi, gamers can enjoy smooth and lag-free gaming experience with or without plugging into Ethernet. 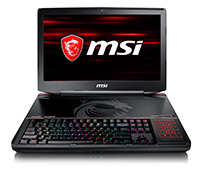 The GT83 Titan is been designed to pack full desktop gaming experience in a mobile powerhouse, and is the first laptop to integrate a full Cherry MX Speed Silver switch keyboard. The innovative design has effectively swept multiple awards, including the Computex Best Choice Golden award. The new 8th gen Intel processor comes with 6 cores under the hood, and boosts the performance by up to 40%. Along with the GeForce GTX 1080 SLI graphics and exceptional cooling, the new GT83 is not only more powerful than ever, but also the best desktop replacement to date. 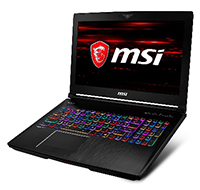 Built upon the popular GT62 series, the new GT63 has evolved in both aesthetic and performance. By featuring the latest 8th gen Intel processor and up to GeForce GTX 1080 graphic, the GT63 is the most powerful 15” gaming laptop in the world. Joining in line with the RGB trend, the GT63 now features per-key RGB SteelSeries gaming keyboard. It comes with everything gamers know and love, but takes lighting to a new level by granting gamers the ability to customize every single key to their own liking. From built-in lighting presets to personalization in 16.8 million colors, every GT63 can be unique and like no other.

With the entire GT series now featuring per-key RGB backlighting keyboards, MSI steps up a notch by rolling out a massive update of the Dragon Center 2.0 that comes with an exclusive gaming mode. The redesigned Dragon Center 2.0 now comes with a sleek UI that is intuitive while still offering advance configurations for the power users. The gaming mode now optimizes system performance and game-specific keyboard lighting for a list of supported new titles. All adjustments will be done automatically upon launching the game, without the hassle of manually configuring settings. In short, all gamers have to do is to launch the game, and the new Dragon Center will take care of the rest.


For high-res images, please go to: http://msi.gm/2tgEqPV
us